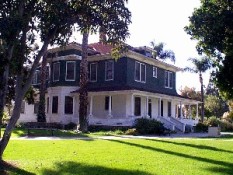 Our first pioneer was Daniel Kraemer, who purchased 3900 acres in 1865. Three years later, William McFadden and his wife, Sarah Jane, acquired 100 additional acres in the area. Many other settlers arrived in the following years. Residents built churches and schools as the community slowly developed.

The school district’s original name was the Cajon School District. In 1878, at the suggestion of Sarah Jane McFadden, the name was changed to the Placentia School District. Placentia is derived from a Latin word meaning "pleasant place to live." The city name came from that change.

Placentia was placed on the map in 1910 when A.S. Bradford persuaded the Santa Fe Railroad to re-route their track through this area, thus shortening the rail distance to Los Angeles. A station was built and packing houses were established for the town’s growing citrus industry. Mr. Bradford and Richard Melrose laid out the main streets of the town and, in his honor, Bradford Avenue and Melrose Avenue retain their names today.

Population
Placentia’s climate and rich land attracted an ever-growing number of new residents. The area was well suited for raising citrus fruit, walnuts, avocados, and grapes. Placentia became the center of Valencia Orange Growing and Packing, and its 500 citizens voted to incorporate the City in 1926.

In 1960, Placentia’s population had reached only 5,000; however, a phenomenal growth period was just beginning. By 1970, the population had increased five-fold to nearly 25,000. Today, Placentia is still a fast-growing community with 45,000 residents, beautiful suburban homes, good schools, stately churches, and wholesome recreation.

Did you know, we are not the only "Placentia" in the world? A check of the world atlas reveals a Placentia in Newfoundland, Canada. Placencia Peninsula is a geographical feature and small beach resort town on the coast of Stann Creek District, Belize. Carthaginian Commander Hannibal (247- c.183 BC), his army, and their warrior elephants camped in Placentia (Italian: Piacenza) in Northern Italy before crossing the Alps.

The Southern California Association of Governments (SCAG) has released its "Local Profile" reports - including newly released census and economic data. The information is released for each city, county, and unincorporated area within the SCAG region. The reports provide current and historical demographics, socioeconomic, housing, transportation and education data, gathered from a variety of sources. View the City of Placentia’s Local Profile report (PDF).

For more information about Placentia, contact the Administration Department at (714) 993-8117.